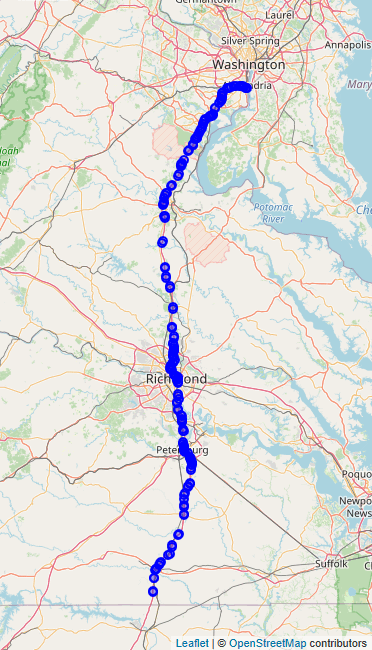 Interstate 95 (I-95) runs 179 miles (288 km) within the Commonwealth of Virginia between its borders with North Carolina and Maryland. I-95 is concurrent with I-64 for 3 miles (4.8 km) in Richmond, and meets the northern terminus of I-85 in Petersburg. Although I-95 was originally planned as a highway through Washington, D.C. (following the route of what is now I-395), it was rerouted along the eastern portion of the Capital Beltway. From Petersburg to Richmond, I-95 was most of the Richmond–Petersburg Turnpike (the south end of the toll road was on I-85.)

It enters the Capital Beltway at the Springfield Interchange, also known as the Mixing Bowl. I-95 continues over the Woodrow Wilson Bridge into Washington, D.C. (for 0.11 miles on the bridge), and then into Maryland on the Capital Beltway.

The route between Fredericksburg and Springfield is consistently one of the most congested routes of highway in the United States, particularly during holidays and rush hours. The causes for this congestion are lack of alternative routes, fewer lanes than needed, and the spread-out suburbs of the Washington, D.C. area.