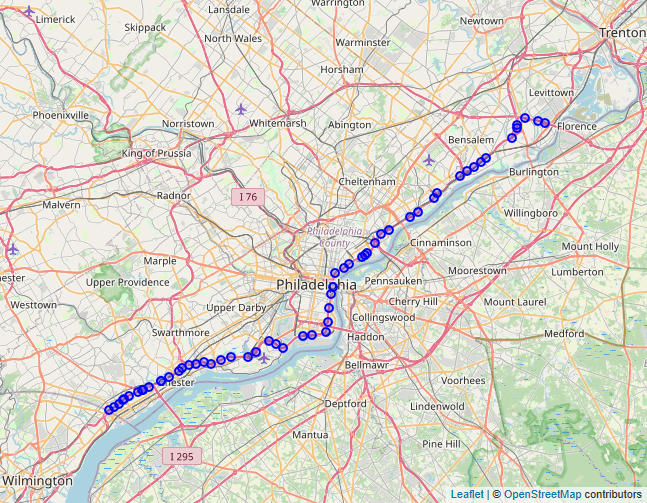 Interstate 95 (I-95) is an Interstate highway running from Miami, Florida, north to Houlton, Maine. In the U.S. state of Pennsylvania, it runs 44.25 miles (71.21 km) from the Delaware state line near Marcus Hook in Delaware County northeast to the Delaware River–Turnpike Toll Bridge at the New Jersey state line near Bristol in Bucks County. From the Delaware state line to exit 40, the route is known by many as the Delaware Expressway, but is officially named the Vietnam Veterans Memorial Highway. North of exit 40, I-95 runs along the easternmost portion of the Pennsylvania Turnpike; this portion of road is not signed as part of the turnpike. I-95 parallels its namesake Delaware River for its entire route through the city of Philadelphia and its suburbs. It is a major route through the city and the metropolitan Delaware Valley, providing access to locally important landmarks such as Subaru Park, Philadelphia International Airport, the South Philadelphia Sports Complex, Penn's Landing, and Philadelphia Mills.

Plans for a limited-access route along the Delaware River in the Philadelphia area originated in the 1930s when both a parkway and elevated highway were proposed; neither of these were built. The Delaware Expressway was approved in 1945 as a toll road that was to be part of the Pennsylvania Turnpike system until the project was turned to the Pennsylvania Department of Highways in 1956, with the expressway to be included in the Interstate Highway System as part of I-95. Construction on I-95 began in 1959 and was mostly complete by 1979, with the final portion near the Philadelphia International Airport finished in 1985. The route was originally projected to run through the center of Trenton, New Jersey, but was rerouted to the Scudder Falls Bridge to the north due to limited capacity in Trenton. I-95 remained on this alignment until July 2018 when the route was truncated to the Pennsylvania Turnpike, being replaced by an extended I-295 north of there. Upon completion of two new high-speed flyovers connecting I-95 and the Pennsylvania Turnpike on September 22, 2018, I-95 was extended to the east into New Jersey toward the New Jersey Turnpike along the former I-276 (Pennsylvania Turnpike).