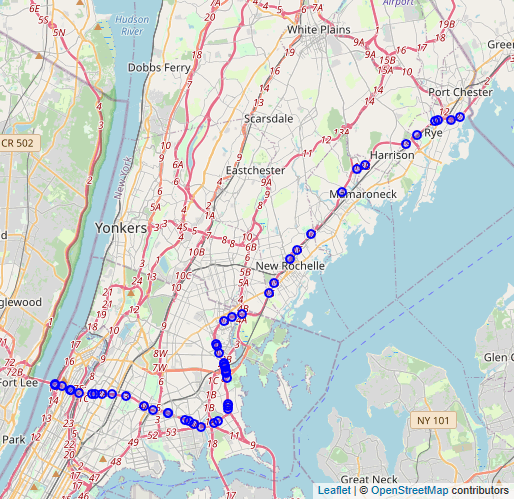 Interstate 95 (I-95) is part of the Interstate Highway System and runs from Miami, Florida, to the Canada–United States border near Houlton, Maine. In the U.S. state of New York, I-95 extends 23.50 miles (37.82 km) from the George Washington Bridge in New York City to the Connecticut state line at Port Chester. From the George Washington Bridge, which carries I-95 across the Hudson River from New Jersey into New York City, it runs across upper Manhattan on the Trans-Manhattan Expressway and continues east across the Harlem River on the Alexander Hamilton Bridge and onto the Cross Bronx Expressway. In the Bronx, I-95 leaves the Cross Bronx at the Bruckner Interchange, joining the Bruckner Expressway to its end. North of the interchange with Pelham Parkway, it then continues northeast via the New England Thruway (which is part of the New York State Thruway system) out of New York City into Westchester County and to the Connecticut state line, where I-95 continues on the Connecticut Turnpike.