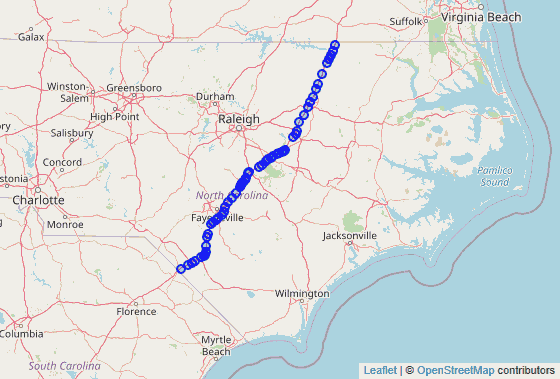 Interstate 95 (I-95) is a part of the Interstate Highway System that runs along the East Coast of the United States from Miami, Florida to the United States-Canada border in Houlton, Maine. In the U.S. state of North Carolina, the route runs for 181.71 miles (292.43 km) from the South Carolina border near Rowland, North Carolina to the Virginia border near Pleasant Hill, North Carolina. The highway serves the cities of Lumberton, Fayetteville, Wilson, Rocky Mount and Roanoke Rapids. The route goes through a mostly rural area of the state, avoiding most of the major metro areas of North Carolina. It forms the informal border between the Piedmont and Coastal Plain regions of the state. There are two auxiliary routes for I-95 in the state: I-295, a partially completed bypass of Fayetteville and I-795, a spur route connecting I-95 to the city of Goldsboro.

Interstate 95 enters North Carolina at the South Carolina line, just north of the South of the Border attraction and just to the south of the town of Rowland. Traveling mostly northeast from the border, the road enters Lumberton where it interchanges with I-74. Frontage roads through Lumberton have extensive travel services, including restaurants, shops, and hotels. Leaving Lumberton, the route turns due north through a rural area of the state, past the small farming community of St. Pauls. I-95 serves as the eastern bypass of Fayetteville where Interstate 95 Business, an older alignment, connects I-95 to downtown Fayetteville.

I-95 interchanges with I-40 in Benson, North Carolina, U.S. 264 in Wilson, and U.S. 64 in Rocky Mount, three of the main east-west routes in the eastern part of the state. The last city it passes is Roanoke Rapids before leaving the state near the unincorporated community of Pleasant Hill at the Virginia border. For most of the route, I-95 is paralleled closely by U.S. 301.