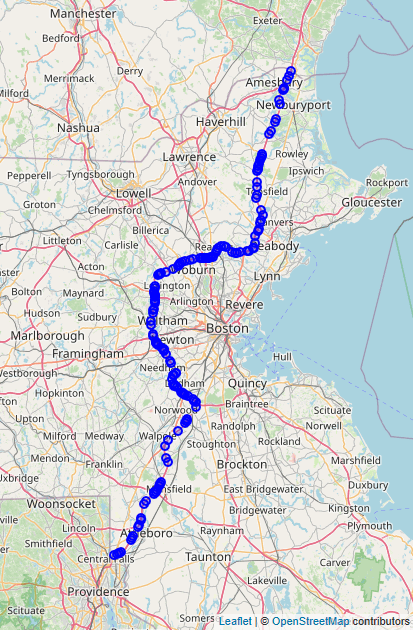 Its southern terminus within the state is located in Attleboro, where I-95 enters from Pawtucket, Rhode Island. It intersects with U.S. Route 1 (US 1) and the northern terminus of I-295 within Attleboro, I-495 in Mansfield, and US 1 in Sharon before arriving at an interchange with I-93, US 1, and Route 128 in Canton. At this interchange, I-95 begins running concurrently with US 1 and Route 128 along a beltway roughly 15 miles (24 km) outside of Boston. While earlier plans called for I-95 to run northeastward through Boston along the Southwest Corridor and a more northerly portion of Route 1 known as the Northeast Expressway, these plans were squashed due to fierce community opposition. As such, Boston is one of only two major east coast cities that I-95 bypasses (the other, Washington DC, for the same reason).

While its concurrency with US 1 ends in Dedham, its concurrency with Route 128 continues as it meets with expressways including the Massachusetts Turnpike in Weston, US 20 in Waltham, Route 2 in Lexington, US 3 in Burlington (with which it runs concurrently within the town), and I-93 and US 1 in Reading and Lynnfield, respectively. I-95 and Route 128 split in Peabody, as Route 128 travels north-east towards its northern terminus in Gloucester, I-95 continues north and crosses US 1 in Peabody and Danvers. Within Salisbury, it intersects the northern terminus of I-495 and arrives at its own northern terminus, where I-95 continues into Seabrook, New Hampshire as the Blue Star Turnpike.