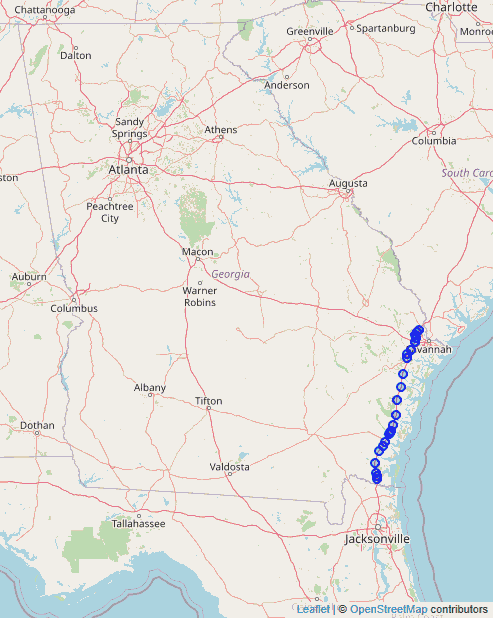 Interstate 95 (I-95), the main Interstate Highway on the east coast of the United States, serves the Atlantic coast of the U.S. state of Georgia. It crosses into the state from Florida at the St. Marys River near Kingsland and travels to the north past the cities of Brunswick and Savannah to the South Carolina state line at the Savannah River near Port Wentworth. The route also passes through the cities of Richmond Hill, Darien and Woodbine. I-95 in Georgia has the unsigned designation of State Route 405 (SR 405

All of I-95 in Georgia has three lanes in each direction, except in the Brunswick area and in the area of the I-16 Intersection, where it has four lanes in each direction. From the Florida state line to west of Savannah, I-95 travels along the U.S. Route 17 (US 17) corridor, passing near or through marshlands, and is close to the Atlantic coastline.

The highway enters Georgia via twin bridges over the St. Marys River, where it immediately enters the city of Kingsland, intersecting State Route 40 (SR 40). The Interstate continues generally north-northeast, bypassing the smaller communities of Woodbine and Waverly en route to Brunswick, where it intersects US 17, US 25, and US 341. The freeway leaves Brunswick, bypassing the cities of Darien and Midway, before reaching the southern suburbs of Savannah. The route first encounters US 17 again, this time in Richmond Hill, before intersecting SR 204, a busy freeway and southern bypass into Savannah. The route then intersects with I-16 and US 80 in Pooler, also providing direct access to Savannah/Hilton Head International Airport via the Airways Avenue exit (exit 104). After that, the final exit in Georgia is in Port Wentworth, where it intersects SR 21/SR 30 and SR 565 (Savannah River Parkway), the major thoroughfare between Augusta and Savannah. I-95 leaves Georgia via twin bridges over the Savannah River, and heads north into South Carolina.

I-95 intersects I-16 near Savannah (exit 99). Ramps to and from the eastbound lanes of I-16 feature barrier gates to prevent traffic from entering I-16 in the wrong direction during contraflow lane reversal for hurricane evacuations.