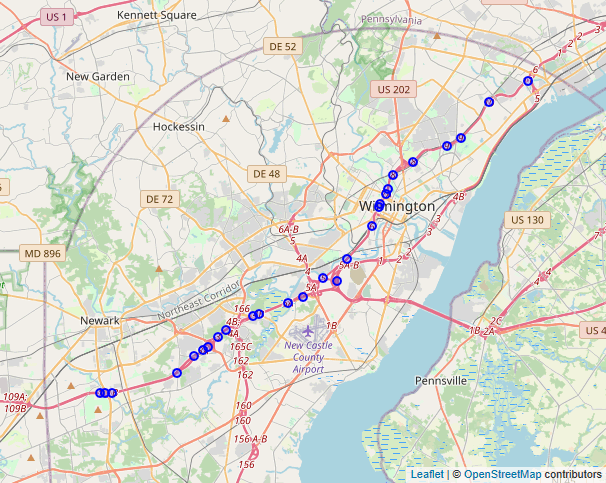 Interstate 95 (I-95) is an Interstate highway running along the East Coast of the United States from Miami, Florida north to the Canadian border in Houlton, Maine. In the state of Delaware, the route runs for 23.43 mi (37.71 km) across the Wilmington area in northern New Castle County from the Maryland state line near Newark northeast to the Pennsylvania state line in Claymont. I-95 is the only primary (2-digit) Interstate highway that enters Delaware, although it also has two auxiliary routes within the state (I-295 and I-495). Between the Maryland state line and Newport, I-95 follows the Delaware Turnpike (John F. Kennedy Memorial Highway), a toll road with a mainline toll plaza near the state line. Near Newport, the interstate has a large interchange with Delaware Route 141 (DE 141) and the southern termini of I-295 and I-495, the latter interstate providing a bypass of Wilmington. I-95 heads north through Wilmington concurrent with U.S. Route 202 (US 202) on the Wilmington Expressway. Past Wilmington, I-95 continues northeast to Claymont, where I-495 rejoins the route right before the Pennsylvania state line.

Plans for a road along the I-95 corridor through Wilmington to the Pennsylvania border predate the Interstate Highway System. After the Delaware Memorial Bridge was built in 1951, the Delaware Turnpike was proposed between the bridge approach near Farnhurst (present-day interchange between I-95 and I-295) and the Maryland state line near Newark in order to alleviate traffic congestion on parallel US 40. With the creation of the Interstate Highway System in 1956, both these roads were incorporated into I-95. Construction on the Delaware Turnpike began in 1957 and ended in 1963. Construction on building I-95 through Wilmington began in the early 1960s. I-95 was completed north from Newport to downtown Wilmington in 1966 and north to the Pennsylvania state line in 1968. Between 1978 and 1980, I-95 was temporarily rerouted along the I-495 bypass route while the South Wilmington Viaduct was reconstructed; during this time the route through Wilmington was designated as I-895. Improvements continue to be made to the highway including widening projects and reconstruction of sections of the road and interchanges.